Ollerup grew up with innovation, gymnastics and community over many, many years – and we are still at the forefront because we have history behind us. 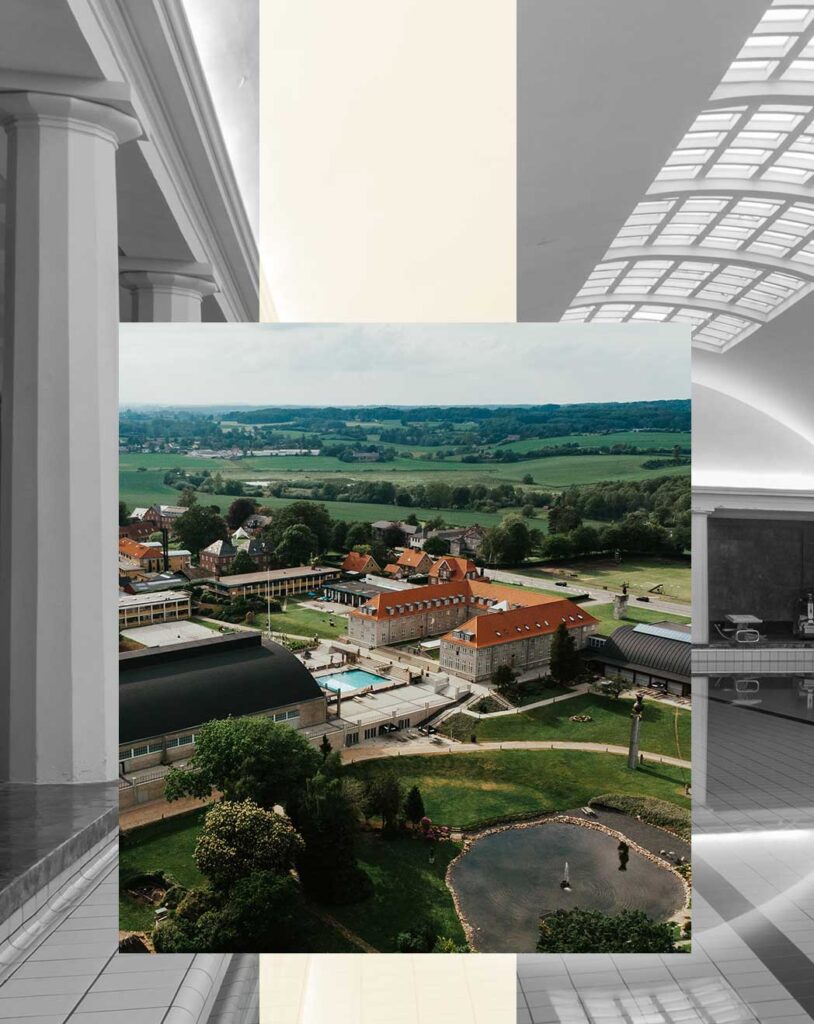 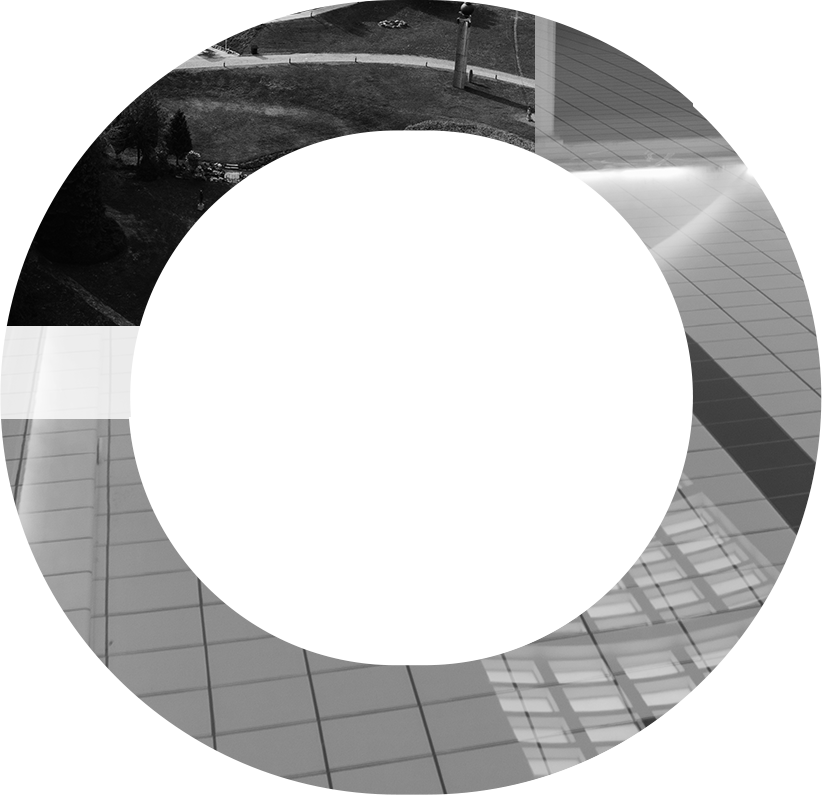 A century of gymnastics

Ollerup Gymnastikhøjskole is the world’s oldest of its kind. We started with gymnastics, the concept of healthy living and with Grundtvig’s ideals in fresh memory – and we’ve developed quite a bit in the meantime. Half-jokingly, we call ourselves a living museum, because even though we don’t perceive ourselves in this way, it’s true. We live a vibrant life with young, fresh people, and bare feet still walk around on the floor of our hundred-year-old gym every single day. Our old living rooms tell stories of different times, while our Arena still smells of fresh paint. That’s Ollerup- and it has taken a long time to become exactly this way.

It started with a number of innovative ideas about health and communal spirit and our pioneering and somewhat eccentric founder, gymnastics educator Niels Bukh. Together with the folk high school people Lars Bækhøj and JP Kristensen-Randers. Over time, many books have been written about Niels Bukh in particular, both because he has played a major role both in how our school looks today – but also to a large extent in how Danish and international gymnastics has developed. When we then call him an eccentric, it is because Bukh at that time was fascinated by things that today would be difficult to defend.

The Gymnastics Academy became internationally known from the beginning, and has therefore both helped to start the Danish gymnastics travel tradition, and received international students. Today, upwards of half of Ollerup’s students are international, and we still take great pride in promoting diversity, tolerance and supporting each other’s differences. In line with Grundtvig’s and Kold’s thoughts, as well as the folk high school’s purpose and values, we focus on democratic formation, personal development and on community as a driving and necessary part of life. We equip our students to better reflect upon their choices and values, to choose responsibly in their lives, to further educate themselves, to contribute and to inspire and involve their surroundings with these choices. To choose for the community – and not just for oneself. Moreover, even today, just as 100 years ago, we still try to be at the forefront of gymnastics, both nationally and internationally. That is, after all, where we come from – and we still love our gymnastics unreservedly.

In our living museum you see bits of history everywhere – because our old, but still young school is actually a bit of a museum. Niels Bukh’s own office and our “old living rooms”, still stand almost untouched, even though they are still used as study rooms, preparation rooms and for both meetings and communal singing. Our swimming pool was the first in Northern Europe when it was built in 1926 – and due to its architecture, it even won the silver medal in art at the 1935 Olympics. Yes – at that time art was actually an Olympic discipline. Since the college’s founding, there has been a tradition for a group of boys to become “Bisser”, and for a few weeks after their stay maintain the school in return for extra, intensive gymnastics training. Like the OD-Day, the Student Meeting, the Elite Team and much, much more, it is a tradition we still hold on to.

Wherever you look at Ollerup, you will see the school’s logo; A flower with the letters OD in the middle. These letters have two closely related meanings. The first is the abbreviation for Ollerup Delingsførere, because the purpose of Ollerup was, just like in the scout movement or in the military, to train pioneers. After their stay, students should inspire others to follow the same healthy, responsible tradition. They would do that through “Word and Deed” – in Danish “Ord og Daad”, the second meaning of the letters. The letters are thus linked to create a connection between the role as a representative of a healthy, strong, community-creating culture, and between one’s words and deeds. As an OD, you are what you say – and you say what you are.

Since its founding, approximately 30,000 young people have studied at Gymnastikhøjskolen in Ollerup, and about a quarter of them today keep in touch with the school and with each other through Denmark’s largest student association. We are aware of our role in both gymnastics, sports and association life, and today, as then, all the school’s employees and representatives work to ensure the role of the college, of gymnastics and the folk high school education for our youth.

If you would like to experience our history, you are of course welcome to visit us – we’re always happy to show you around. In the meantime, you can read the sections below, where you can find both a more thorough introduction to Niels Bukh, our Gymnastics College, our architecture and the art we are so lucky to surround ourselves with.

Fra udkant til forkant - The battle for gymnastics through 100 years

The author gives the description 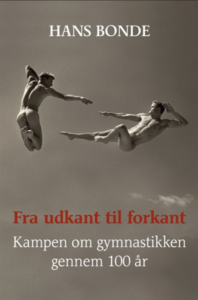 literary nerve, but while maintaining the precision of the professional historian. The book develops the anniversary book genre, partly by taking as a starting point a fantastic series of images that express a central theme for each of the 100 years at the Gymnastikhøjskolen in Ollerup’s history, partly by letting 100 ‘historical witnesses’, dead as alive, unfold the story .

Niels Bukh and his work is not just a milestone in Danish folk high school history. Bukh gymnastics were known far beyond Denmark’s borders. ‘Strong man’ or not: One can not take from him that he aroused tens of thousands of young people and gave them willpower, community spirit, body awareness and a sense of meaning.

The book shows that since Niels Bukh’s days, Ollerup Gymnastics has caused ripples far beyond gymnastics and marked the development of modern stretching exercises, Jane Fonda’s workout and perhaps most surprisingly: Yoga, which many otherwise consider to be purely original Indian. In addition, Ollerup Gymnastics’ imprint in sculpture, literature and photographic art.

The book also shows that today we have succeeded in developing the school from a sporting, architectural and artistic point, with a creativity and a sense of pace that brings back memories of Bukh’s heyday, and which in 2019 culminated in the beautiful, new Ollerup Arena.

Bukh’s impressive buildings and art now form a renewed framework for events with a completely different ideological content than Bukh had originally intended for them, in that the four free schools in Ollerup’s annual democracy festival can innovatively celebrate democracy and the Danish constitution.

It is this whole 100-year journey for a central Danish folk high school, Hans Bonde managed to portray. It’s not just high school and gymnastics history. It is a unique piece of Danish history and at the same time a central part in Danish cultural history.

Kampen for Ungdommen (the Struggle for the Youth)

The gymnastics educator Niels Ebbesen Bukh (1880-1950) is without a doubt one of the greatest icons in Danish sports history. As the founder of Denmark’s and the world’s first sports college, Ollerup Gymnastikhøjskole, Bukh came to influence a generation of Danish gymnasts and became one of the 20th century’s most adored and heretical people. Therefore, it also attracted much public attention and discussion when the historian Hans Bonde in 2001 defended his dissertation Niels Bukh; A political-ideological biography, I-II – a whopping tome of 910 pages.

Now the “folk edition” of the dissertation is available in the form of the book “Kampen om ungdommen”. Niels Bukh – A political biography that has been cleaned up of the academic brain gymnastics to make room for a shorter and more popular narrative about Niels Bukh’s dramatic life.

Rounded by the Grundtvigian peasant environment and the folk high school, Bukh was almost born into country gymnastics. He made his national breakthrough as a gymnastics leader at the Olympics in Stockholm in 1912, where he was the leader of the Danish gymnasts. In the years that followed, Bukh – under i.a. Finnish and French inspiration – the so-called primitive gymnastics that broke with the stationary Ling gymnastics. He was an innovator who developed a whole new male aesthetic that was freer than what the peasants had known before.

In 1920, Bukh took over the folk high school in Ollerup and transformed it into a gymnastics college. The school’s show team became very popular, and a worldwide touring company brought the Ollerup gymnasts on many trips. However, it is Bukh’s political work, and not least his work during the German occupation, that interests Hans Bonde. The book focuses on Bukh’s political life. And Bonde has no doubt that the charismatic Bukh, who was a national symbol and attitude-maker for many young people, was a politically dangerous man during the interwar and occupation periods.

In 1933, Bukh first visited Hitler’s Germany and was overwhelmed by what he saw. To the Danish press, he spoke enthusiastically about the Nazi ideas. It triggered a press avalanche; in social democratic circles, people were very concerned about Bukh’s statements and decided to use unconventional means. Bukh had – according to Bonde – a weak point. He was homosexual, and his political opponents knew how to exploit this, so that they could pressure him not to pursue political propaganda at school. Although Bukh did not publicly swear off his views on the Third Reich, he immediately quieted. Bonde thereby involves Bukh’s private life in his analysis of his political work, thus touching upon the eternal discussion of how intimate details historians should use in their biographical analyzes.

During the occupation, Bukh was often accused of collaborating with the Germans, and Bonde demonstrates that these accusations were correct. Bukh actively cooperated with the Germans. He was at the forefront with plans to become Minister of Youth and with the development of a Danish Youth Association, which was to include all youth organizations. In short, Bukh was to take the lead in the struggle for the physical, religious and political life of Danish youth. But Bukh was a survivor, and despite the difficulties, Bukh rebuilt the high school after the war – never to regain his former reputation.

The book was published on March 6 – the same day that Hans Bonde took over as Denmark’s first professor of sports history at the Department of Sports, University of Copenhagen. It is both a well-written and exciting book that provides a significant understanding of Danish history in the interwar and occupation years. 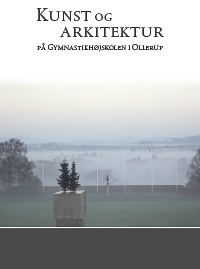 The folder »Art and architecture at Gymnastikhøjskolen in Ollerup« is from 2007.

The leaflet can be purchased in printed form at the school office. Price DKK 25 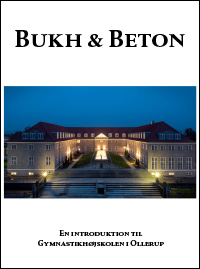 The target group is visiting student classes, who are given the booklet when they arrive on school visits at the folk high school.

Content
The booklet from 2017 is illustrated with historical and recent photos. It contains a preface, introduction and four chapters with literature references:

Necessary Always Enabled
Necessary cookies help make a website usable by enabling basic features such as page navigation and access to secure areas of the website. The website cannot function optimally without these cookies.
Statistical
We collect information about how you interact with the website, including how often you visit the page and which pages you look at. We do this in order to optimize the design, user-friendliness and strengthen the efficiency of the website. In addition, we use the information to provide you with personalized content and prepare market analysis.
Marketing
We collect information about your interests, including which pages and advertisements you click on, which products or services you show interest in, or buy, on this and other websites. We do this in order to show you ads that are relevant to you and your interests. In order to show you targeted ads on this and other websites, we partner with other companies with whom we share information. You can read more about this below.
Unclassified
We are in the process of classifying unclassified cookies together with the providers of the individual cookies.
SAVE & ACCEPT
Powered by